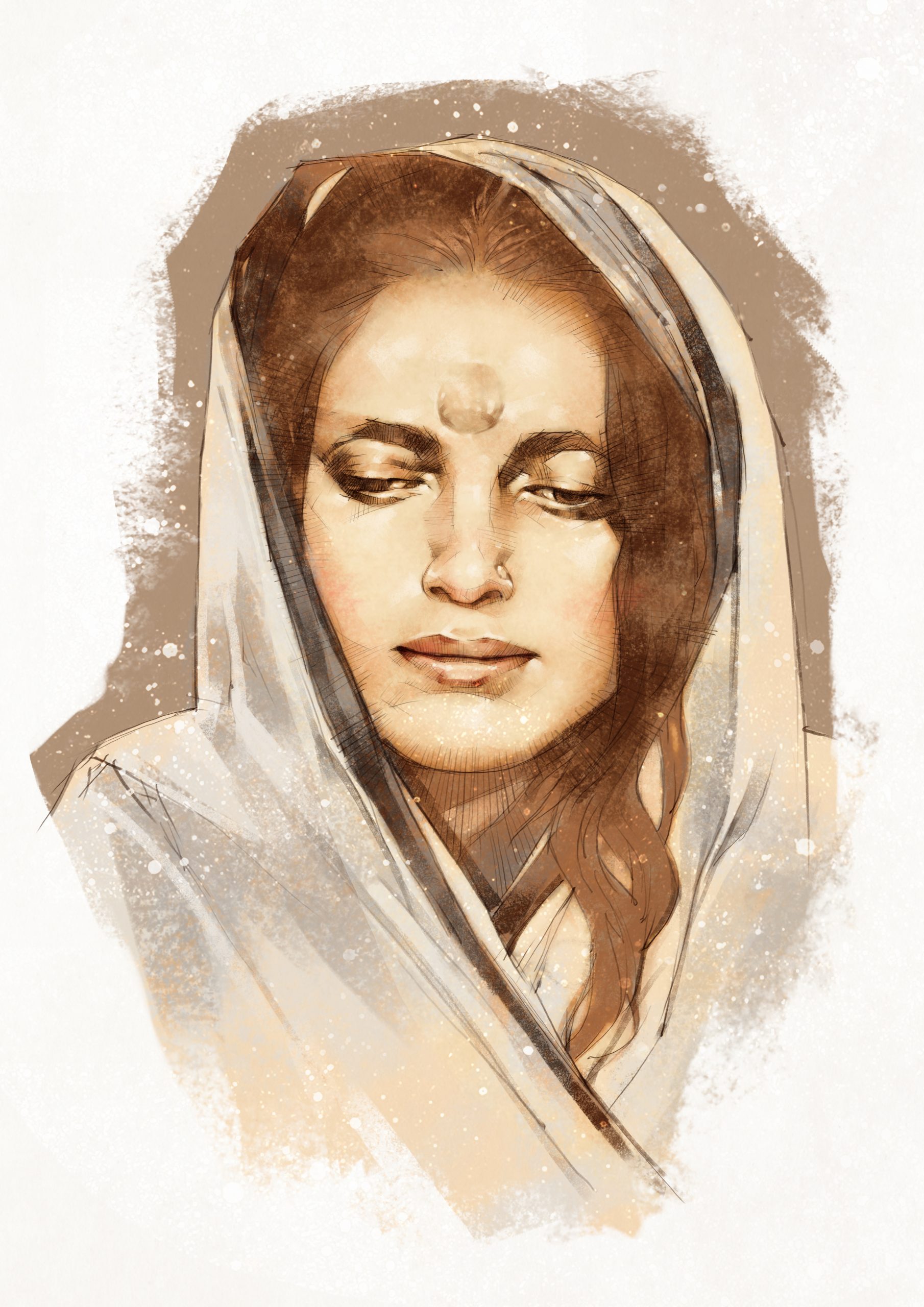 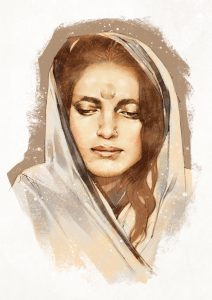 When asked why she was in this world, Sri Anandamayi Ma said, “In this world? I am not anywhere. I am myself reposing within myself.”

An astrologer, Abinush Babu, once had the honor of reading Sri Ma’s palms. He said that her markings were beyond a defined deity or tradition, and “beyond the control of the invisible.” He went on to say that Kali would return to worship her.

Every soul who visited Sri Ma was struck by her sweet but aloof tranquility, and her remarkable depth of presence. It was as if she did not only sway with the wind but was the wind itself.​

There seemed to be no distilling the identity and physical form of Sri Ma from the nature-form of the universe. She appeared to be within all eternal fabrics, and beyond space and time. First-hand accounts state that when seated with Sri Ma, it felt as if you were sitting on the edge of forever.

“Ma Is Here. What Is There To Worry About?”
— Anandamayi Ma

Anandamayi Ma (1896-1982) was an Indian spiritual leader with boundless compassion. She was born as Nirmôla (Nirmala) Shundori (Immaculate Goddess), in Uttrakhand, India. Nirmala’s surrounding village consisted of mostly Muslims who have continued to call her, “Our own Ma.”​

Nirmala’s parents were also euphoric, spiritual initiates, and were known for their kind and lovely natures. Her mother was a devout housewife, loving mother, and generous neighbor. Her father had a beautiful voice and sang the ancient bhajans at local kirtans.

Nirmala’s possibly insane neighbor Harakumar, was the first person to recognize her true divine nature. Morning and night, he would call her “Ma.”

Bhajiji, an early disciple, suggested that her name be Anandamayi Ma, meaning “Joy-Permeated Mother” or “Bliss-Permeated Mother.” In deference to her adoring followers, Nirmala adopted her divine name. Bhajiji would be the first to construct a temple devoted to Andandamayi Ma.​

At age 26, Anandamayi Ma relinquished her human identity and embraced a spontaneous initiation into living sainthood. Describing the late-night ritual, Sri Ma said, “As the master (guru), I revealed the mantra; as the disciple (shishya) I accepted it and immediately began reciting it.”

While many people wanted to package Sri Ma’s ideology and ascribe it to traditional religion, Anandamayi Ma did not allow labels. She would say that she was Christian, Muslim, Hindu, Sikh, Zoroastrian, and more. She had no limits, especially when it came to religious identities because she resided in a boundless reality.

Anandamayi Ma did not lecture like other teachers and gurus. She never prepared her speeches, nor did she compile or edit them. She was a profound conversationalist and delivered the deepest teachings through speedy discussions, laced with good-natured humor.​

Sri Ma did not subscribe to the idea of being anybody’s guru. She also rejected the idea that being a renunciate was required for a spiritual path. She often said, “All paths are my paths. I have no particular path.” While most of her work was not recorded, it is known that Anandamayi Ma’s speeches were drenched in Bengali wordplay, which is difficult to translate with precision. While most of her teachings and instructions were infused with jokes and songs, she gave many long discourses and encouraged silent meditation.

To inspire her devotees, Anandamayi Ma would also give out little hints which she called “kheyala.” Sri Ma’s kheyalas could be found within her words, mantras, and songs. Sri Ma’s prime initiative was clear, “The supreme calling of every human being is to aspire to self-realization. All other obligations are secondary.”

The Gayatri (or Savitri) mantra is dedicated to Savitr, a Sun deity and is derived from teachings found in the Rig Veda. The mantra is widely stated in Vedic texts and was praised by the Buddha.

This holy and revered mantra has long been used to initiate devotees into a devotional Hindu life. While it was long believed the mantra was explicitly intended for boys and men, Sri Ma was the first saint in hundreds of years to initiate women utilizing this mantra.

When we chant this mantra, we are asking the divine feminine to fill our lives, minds, bodies and hearts with eternal positive energy and divine bliss.

Here, in Sanskrit, is the Gayatri mantra:

Swami Vivekananda translated this mantra to mean, “We meditate on the glory of that Being who has produced this universe; may she enlighten our minds.”

Shirram Sharma’s translation is as follows, “Om, the Brahm, the Universal Divine Energy, vital spiritual energy (Pran), the essence of our life existence, Positivity, destroyer of sufferings, the happiness, that is bright, luminous like the Sun, best, destroyer of evil thoughts, the divinity who grants happiness may imbibe its Divinity and Brilliance within us which may purify us and guide our righteous wisdom on the right path.” Regardless of the assumed translation of this holy phrase, when repeatedly chanting this mantra, the seeker’s heart and mind open to an outpouring of divine light.

“The Remembrance Of God Must Be Sustained Under All Conditions And Circumstances.”
— Anandamayi Ma

At the young age of thirteen, Sri Ma became a bride to a man named Ramani. According to Indian tradition, due to her age, she immediately became a servant to her brother’s wife.​

Even though she was submerged in a challenging situation, which included years of unfair treatment, Sri Ma took care of her brother, his wife, their kids, and the majority of their household chores. Amidst all of the drama in the house, Sri Ma remained joyful.​

​For many years, Sri Ma’s family did not understand her happiness, assuming it was the result of a low level of intelligence. Regardless of the challenges and assumptions swirling around her, Sri Ma remained loving and cheerful.

Sri Ma also remained loyal to her marriage with Ramani, whom she named Bholanath. The idea that it was a wholly celibate marriage has never been contested.

Bholanath was Sri Ma’s devotee, and the two traveled together for many years. With her husband by her side, Sri Ma held public programs and kirtans where she would go into full-bodied spiritual ecstasies. Because he became somewhat of a gatekeeper and bodyguard, “Bholanathji” was also seen as a religious figure in some circles.
​
After years of love and devotion, Bholanathji died while Sri Ma’s hand rested gently upon his head. His last words were, “Ananda, Ananda, Ananda.” Joy, Joy, Joy. Throughout their marriage, Sri Ma remained a devout and tireless partner to her husband.

Sri Ma’s reaction to her husband’s death was not surprising to her devotees. She said, “Do you start to wail and cry if a person goes to another room in the house? This death is inevitably connected with this life. In the sphere of Immortality, where is the question of death and loss? Nobody is lost to me.”

It was in this way that Sri Ma’s compassion and detachment were in perfect, divine harmony.

Many first-hand reports describe the unique, spiritual qualities and gifts that this divine master shared with her disciples and householder followers.

During public kirtans, early in her sainthood, Sri Ma swayed to the music as if she were perfectly united with its vibrational material. Amid her bliss, and while her body continued to sway, her spirit would often exit and rise above her body. As Sri Ma’s spirit moved around the room, she shed light on all of the attendees, which resulted in revelations, healings, and deeply inspired peace in the receivers.

These types of experiences were frequent and visible to everyone. It was as if Sri Ma wanted her devotees to see how thin a veil exists between here and the other realms.

Thousands of people reported physical, mental and emotional healings simply by attending her programs, imagining her form or chanting her mantras.

“My consciousness has never associated itself with this temporary body. Before I came on this earth, Father, I was the same. As a little girl, I was the same. I grew into womanhood, but still, I was the same. When the family in which I had been born made arrangements to have this body married, I was the same… And, Father, in front of you now, I am the same. Ever afterward, though the dance of creation changes around me in the hall of eternity, I shall be the same.”
— Anandamayi Ma

Because Sri Ma traveled in a haphazard way, she could follow the flow of the light that moved through her. In cities where ashrams were built to honor her divinity, she would often choose to visit a different location within that city, never stepping foot inside the structures that bared her name.

Even meals could not be assumed. Sri Ma would say, “It is not necessary to eat at all to preserve the body. I eat only because a semblance of normal behavior must be kept up so that you should not feel uncomfortable with me.” It was regularly reported that Sri Ma was in excellent health, whether she ate or not.

With less structure, proprieties, and management dictating her life and travels, it appears that Sri Anandamayi Ma invited the winds of the divine to move through her as spontaneous blessings in every moment.​

Many of her devotees might agree with this sentiment, “The knot of the heart is penetrated, all doubts are resolved, all bondages are destroyed upon seeing Her who is here and beyond.” — Mundakopanisad 11.2.8