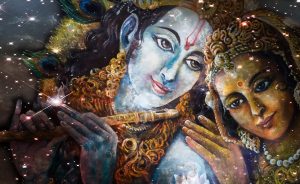 Protect us Oh Lord Narayana
Who wears the forest garland,
Who has the mace, conch, sword and the wheel.
And who is called Vishnu and the Vasudeva.

Thus was told,
All the holy thousand names,
Of Kesava who is great.

He who hears or sings,
It all without fail,
In all days of the year,
Will never get in to bad,
In this life and after.

The Brahmin will get knowledge,
The kshatriya will get victory,
The vaisya will get wealth,
The shudra will get pleasures,
By reading these.

He who sings the thousand names of Vasudeva,
With utmost devotion,
After he rises in the morn,
With a mind tied in Him always,
Will get fame without fail,
Will be first in what he does,
Will get riches that last,
Would attain salvation from these bonds,
Will never be afraid of anything,
Will be bubbling with vim and valour,
Will not get any ills,
Will be handsome forever,
Will have all the virtues in this wide world,
And he who is ill will get cured,
He who is bound will be free,
He who is afraid, will get rid of fear,
He who is in danger, will be safe.

He who chants these holy thousand names,
With devotion to Purushottama,
Will cross the miseries,
That cannot be crossed
Without fail.

The man who nears Vasudeva,
The man who takes Him as shelter,
Would get rid of all sins,
And become purer than the pure,
And will reach Brahmam,
Which existed forever.

The devotees of Vasudeva the great,
Never fall into days that are difficult,
And never forever suffer,
Of birth, death, old age and fear.

He who sings these names with devotion,
And with Bhakthi,
Will get pleasure the great,
Patience to allure,
Wealth to attract,
Bravery and memory to excel.

The devotee of the Lord Purushottama,
Has neither anger nor fear,
Nor avarice and nor bad thoughts.

All this world of sun and stars,
Moon and sky, Sea and the directions,
Are but borne by valour the great,
Of the great god Vasudeva.

All this world,
Which moves and moves not,
And which has devas, rakshasas and Gandharwas,
And also asuras and nagas,
Is with Lord Krishna without fail.

The learned ones say,
That all the limbs,
Mind, wisdom, and thought,
And also strength, bravery, body and the soul,
Are full of Vasudeva.

All the sages,
All the ancestors,
All the devas,
All the five elements,
All the pleasures,
All the luck,
All that moves,
All that does not move,
All came only,
From the great Narayana.

The art of Yoga
And the science of Sankhya.
The treasure of knowledge.
The divine art of sculpture.
And all Vedas and sciences,
All these came from Janardhana.

Vishnu is many,
But He is one,
And he divides himself,
And exists in all beings,
That is in three worlds,
And rules all of them,
Without death and decay.

He who desires fame and pleasure,
Should chant these verses, sung by Vyasa,
Of this great stotra of Vishnu without fail.

He will never fail,
Who sings the praise of the Lord,
Of this universe,
Who does not have birth,
Who is always stable,
And who shines and sparkles,
And has lotus eyes.
Om Nama He will not fail.

The Lord said:
He who likes, Oh Arjuna,
To sing my praise,
Using these thousand names,
Should know Arjuna ,
That I would be satisfied,
By his singing of,
Even one stanza ,
Without any doubt.
Om Nama without any doubt.

Parvathi said:
I am desirous to know oh Lord,
How the scholars of this world,
Will chant without fail,
These thousand names,
By a method that is easy and quick.

Lord Shiva said:
Hey beautiful one,
I play with Rama always,
By chanting Rama Rama and Rama,
Hey lady with a beautiful face,
Chanting of the name Rama ,
Is same as the thousand names.
Om Nama Rama Nama Rama.

Sanjaya said:
Where Krisna, the king of Yogas,
And where the wielder of bow,
Arjuna is there,
There will exist all the good,
All the the victory,
All the fame ,
And all the justice.
In this world.

Sri Bhagavan said:
I would take care,
Of worries and cares of Him,
Who thinks and serves me ,
Without any other Thoughts,
To take care of Dharma,
To protect those who are good,
And to destroy all who are bad.
I will be born from time to time.
If he who is worried,
If he who is sad,
If he who is broken,
If he who is afraid,
If he who is severely ill,
If he who has heard tidings bad,
Sings Narayana and Narayana,
All his cares would be taken care of.

Paul Wagner is a Consciousness, Life, and Business Coach, and a 5-time EMMY-Award winning writer. He created THE PERSONALITY CARDS, a powerful Oracle and Tarot deck that’s helpful in life, love, and relationships. For years, Paul studied with Lakota elders in the Pecos Wilderness, who nurtured his empathic abilities and taught him the sacred rituals. He has degrees from Boston College in Computer Science and Psychology. Mr. Wagner has lived at ashrams with enlightened masters, including Amma, the Hugging Saint, for whom he’s delivered keynotes at Her worldwide events. Paul tours the world lecturing about personal expansion and spiritual freedom. He lovingly offers intuitive readings and inspirational coaching to help you with self-discovery, decision-making, forgiveness, and business. Book a session with Paul.