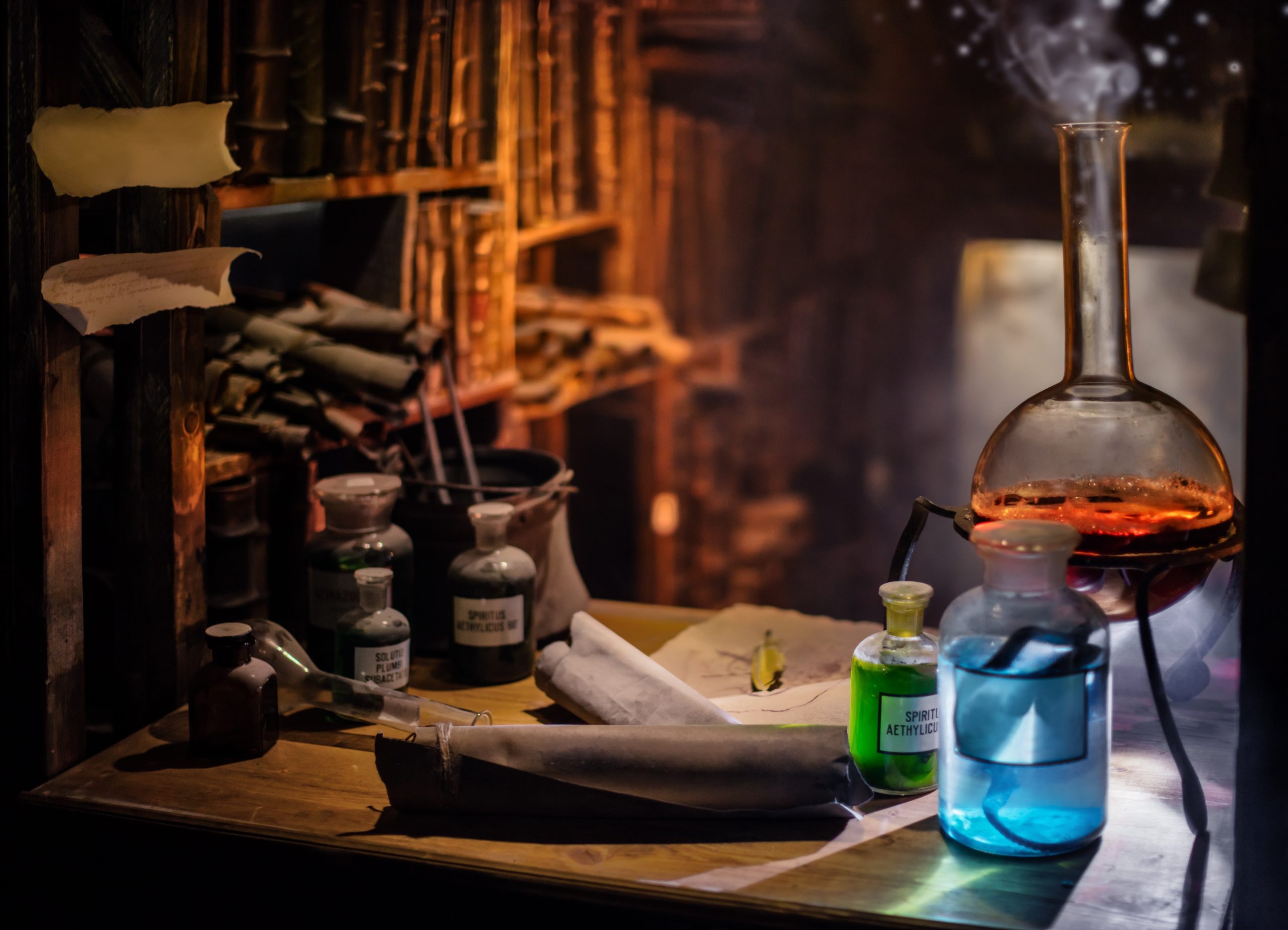 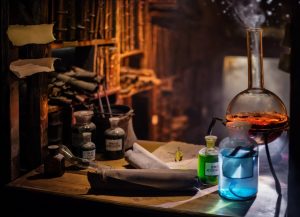 What is alchemy? Alchemy comes from the Arabic al-kīmiyā, a synonym of al-iksir (elixir), and was thought to mean something akin to, “The process and means by which something is obtained or changed.” This definition holds true today.

While originally a protoscience (precursor to an academically approved science), alchemy is now part of a global lexicon that serves people in their pursuits of individuation, self-empowerment, and embodiment of the light. When choosing to become an alchemist, you are saying you believe yourself to be in service of the light, in pursuit of understanding and healing your shadows, and on a path that seeks to up-level and heal humanity. If we believe ourselves to be representative of the universe, born of light and stardust, and with unlimited potential, then it is quite possible that we can change our hearts, minds, and physical realities. It is in this way that each of us might be an alchemist.

“The True Alchemists Do Not Change Lead Into Gold;
They Change The World Into Words.”
― William H. Gass, A Temple of Texts

The Light Beyond The Stars

Zep Tep, meaning “first time,” is an ancient Egyptian phrase. It refers to an age that occurred over 12,000 years ago when divine beings came through the eternal void to educate and enlighten primitive humans inhabiting the earth at that time.

While well-intending human beings contaminated the original teachings, this ancient, timeless, angelic download is known as the pre-foundation of modern alchemy. To the champions and disciples of what is also known as “the way,” alchemy is a seraphic gift from light beings who descended from beyond the stars.

All of life is interconnected. Our minds are the galaxies, our fingers and toes are the planets, and our organs are the stars that bring us light and life. We are each an embodiment of the universe, and therefore have the power to improve our lives, conditions, and environments at every turn.

We achieve these things through prayer and meditation, healing and nutritional remedies, and clear and intentional activities. These are the premises behind esoteric or spiritual alchemy, as distinct from those seeking to make gold, known as exoteric, the obsolete branch of alchemy.

Before Chemistry, Islam, and Christianity, there was Alchemy, a system of pre-science assumptions, beliefs, elixirs, processes, and traditions that purported to heal the sick, transform personal relationships, remove mental afflictions, turn metals into gold, change the dynamics of political power, grow allegiances, open hearts, co-create miracles, and even kill. Alchemy was a catch-all for how to gain control of life and its many foes and challenges.

Originally based on what are now widely considered to be disproven scientific principles, the whole of alchemy remains a beautifully woven fabric of fascinating, illuminating, and transformative ideas derived from magic, physics, mythology, art, astrology, and a variety of religions.

Even though portions of early alchemy are antiquated (and slightly funny), what some academics seem to have forgotten is that Sir Isaac Newton, often recognized as one of history’s most influential scientists (and the master of gravity and calculus), utilized Alchemy to understand the physical world and develop some of his most profound laws, theorems, principles, and algorithms. Even though he also dabbled in junk “science,” Newton thought highly of all branches of alchemical sciences and considered himself a student, if not an embodiment of its tenets.

If you remove the disproven principals from early alchemy, the result is a profound, productive, and experiential ideology based in the idea that as conscious, living beings, existing in three-dimensional space, we have the ability to represent and embody the universe, and in so doing, effect change in our lives, and in the lives of the those we love and serve.

In Paulo Coelho’s highly acclaimed book, The Alchemist, he writes:

“This Is Why Alchemy Exists, So That Everyone Will Search For His Treasure, Find It, And Then Want To Be Better Than He Was In His Former Life. Lead Will Play Its Role Until The World Has No Further Need For Lead; And Then Lead Will Have To Turn Itself Into Gold. That’s What Alchemists Do. They Show That, When We Strive To Become Better Than We Are, Everything Around Us Becomes Better, Too.”

Alchemy is widely practiced in our modern world, yet generally misunderstood. While once considered science, it now functions within the categories of mysticism, the new age, and transpersonal psychology. While some see alchemy as antithetical to science and possibly the work of the devil, a growing population has come to understand alchemy as an effective pathway to personal growth, empowerment, and transformation. Carl Jung was a passionate alchemist and he used alchemical methodologies to heal his patients.

“Closer Examination Of The Dark Characteristics – That Is, The Inferiorities Constituting The Shadow – Reveals That They Have An Emotional Nature, A Kind Of Autonomy, And Accordingly An Obsessive Or, Better, Possessive Quality.”
– Carl Jung

Jung helped his patients accept and address the contents of their subconscious, even the things that could bring about darkness, shame, and fear.

All of alchemy is drenched in secrets, ciphers, and symbolism, the derivatives of which are used by Sufis, pagans, new agers, scientists, and alchemists alike. While the mystery of ciphers and symbols cannot be covered within this one article, ciphers and cryptic symbolism are at the foundation of early life on this planet and have been used by brilliant leaders, writers, priests, shamans, healers, doctors, and psychologists throughout time.

What is a cipher? A cipher is a disguised style of writing, used to prevent the reader from fully understanding what he or she is reading. Cryptic symbolism refers to the use of secret signs, designs, icons, and messages hidden within delicate and precarious manuscripts. The word cryptic comes from the Greek and was first used to describe the vault beneath a church where dead people were buried. If something is cryptic, it’s serious, secret, and hidden.

Alchemists are famous for their secrets. Secret codes, secret symbols, and secret methodologies. Some alchemists chose a variety of methods to protect themselves and their families from government and religious persecution. Others felt that their ideas were sacred and should not be shared with the general population. The codes, ciphers, and symbols protected everyone involved, along with all of their rites, rituals, and ideas.

The use of secrecy methods helped to create a hidden society and a pathway to membership. If you knew the codes, ciphers or symbols, then you probably knew someone in the tribe. This would have given you the ability to request entrance and initiation.

The extended list of the original alchemical symbols includes earth, air, water, fire, salt, mercury, sulfur, copper, silver, philosopher’s stone, gold, iron, antimony, tin, platinum, lead, arsenic, phosphorus, bismuth, magnesium, zinc, potassium carbonate. Some say this list was the beginning of the periodic table, but these symbols have deeper meanings that are intrinsic to the ancient rituals and ideology embedded in alchemy’s history and traditions.
Alchemist symbols can be mapped to Carl Jung’s analysis of the anatomy of the subconscious. Many of the symbols and their derivatives are signposts in Jung’s journey toward individuation.

Jung would say that the psyche could not be understood intellectually, and only through images or symbols. According to Jung, it’s in this way that the symbols of alchemy are a roadmap to self-discovery.

Partly based in The Hermetic principles (and associated with the Rosicrucian brotherhood), and with a history steeped in Hellenistic Egyptian ideology, alchemy is rich in science, tradition, culture, and mythology. At several junctures in the earth’s history, it took courage to be an alchemist.

Here is a shortlist of some of the most notable alchemists throughout time. Each has a unique perspective on the principles of alchemy. Please note that this is a partial list provided strictly to help the reader initiate their own research. While this list is neither comprehensive or complete, it’s a great place to start and covers a broad spectrum of alchemists from several continents and time periods.

How Can I Use Alchemy To Improve My Life?

For some, alchemy offers a workable ideology and practical solution to alleviating fear, sadness, conflicts, and pain.
To be an alchemist means you enjoy using words, writing, incantations, rituals, intentions, and right action to heal yourself and coax reality into fulfilling your heartfelt desires.

According to the basic tenets of alchemy, if we engage in thoughtful, prayerful and love-based intentional action, we can create, promote, help, heal, and enhance our lives in myriad ways, including: