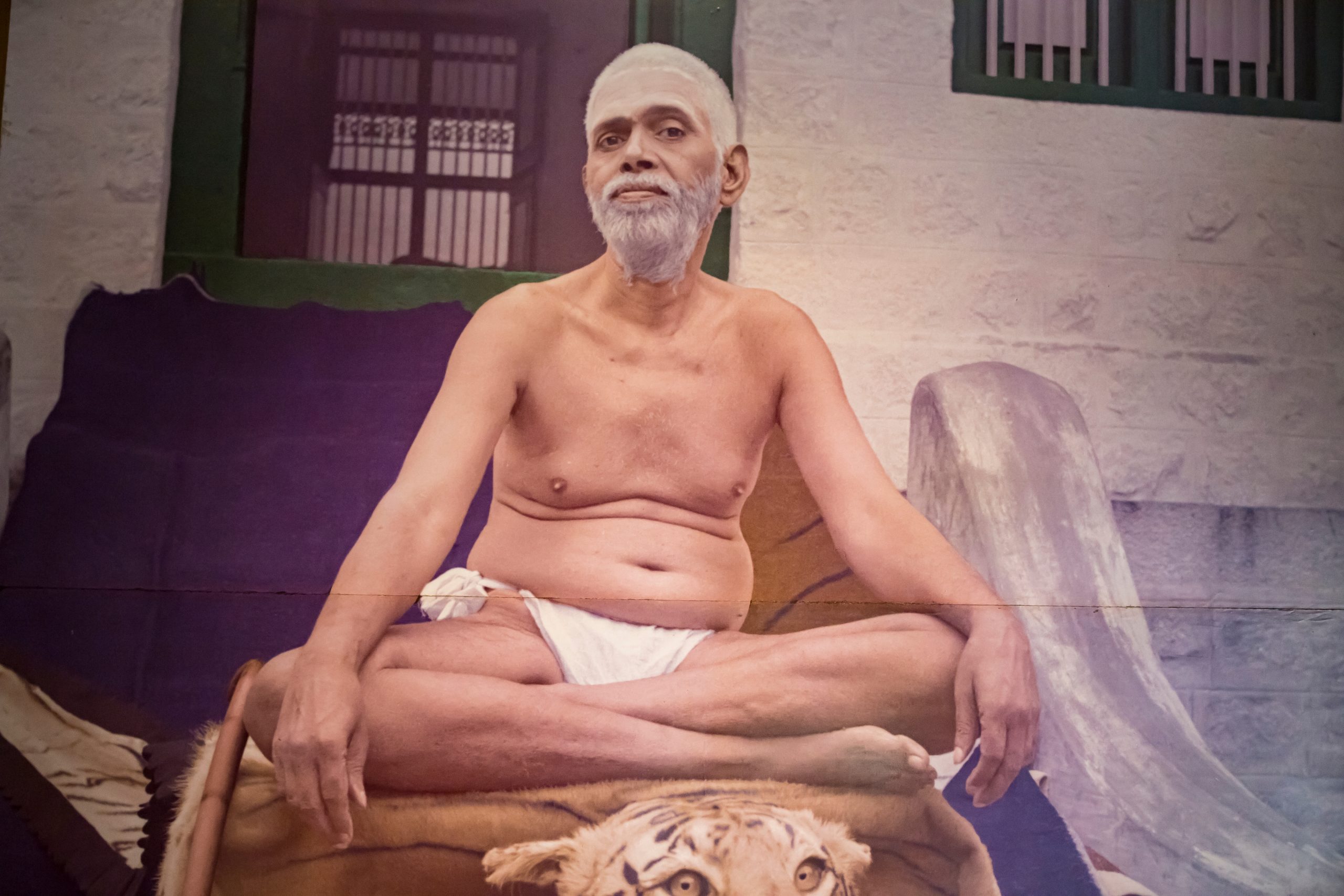 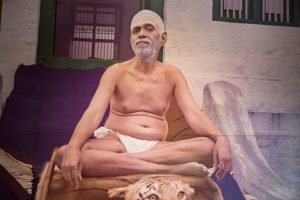 Bhagavan Ramana Maharshi (1879-1950) was an Indian Satguru, born as Venkataraman Iyer, to a Brahmin family in Tiruchuzhi, South India.

In his early childhood, upon his father’s death, the young Venkataraman was separated from his mother and placed with his loving uncle. A sensitive soul, and strong athlete, Venkataraman endured beatings by local schoolboys. More and more, he became fascinated with local temples and the statues of its deities.

For several years Bhagavan refrained from speaking and spent each day in samadhi. He attracted many devotees who saw him as an avatar. They would sit at his feet awaiting his darshan (blessing). Many of his earliest devotees also became self-realized.

Eventually, Bhagavan’s followers built an ashram around him in Tiruvannamalai, which they named “Sri Ramana Ashram” or “Sri Ramanasramam.” This became Ramana’s home from 1922 until his death in 1950.

A self-realized woman, Sankarammal, who worked in the ashram’s kitchen said of Ramana, “Silence was the state of Bhagavan, and his direct teaching was only through silence. Those who received his message of silence had no need whatsoever to talk to him, much less a need for his instructions. How can I possibly express in words the mysterious working of Bhagavan through silence?”

Tiruvannamalai is also where Ramana Maharshi declared his love for the resident mountain, Arunachala. His luminous spirit continues to fill the hearts of his many followers around the world.

“By Incessantly Pursuing Within Yourself The Inquiry ‘Who Am I?’, You Will Know Your True Self And Thereby Attain Salvation.”
— Bhagavan Ramana Maharshi

When he was in his early teens, someone gave Ramana a copy of Sekkilar’s Periya Puranam, or Great Purana, which describes the lives of sixty-three Shaivite saints. Ramana became entranced by this book which inspired the death of his ego.

In the middle of 1896, at age 16, Ramana fell flat on the floor in rigid form and held his breath. In the midst of self-inquiry (in Sanskrit “vichara,” also called jnana-vichara or ātma-vichār), during this physicalized death of his body, Ramana realized the eternal nature of his soul, an eternal force he called “a personal God” or “Ashwara.” Amid this awakening, Ramana said, ”My body is dead now, but I am still alive.” The resulting flood of spiritual awareness gave birth to his self-realization.

When Sri Ramana first arrived in Tiruvannamalai, he stayed in a great temple. While sitting silently in samadhi for days upon end, he was often unaware of his many visitors, including bugs, ants and vermin.

When he moved to the underground vault known as Patala Lingam, local, mischievous boys would harass him and barraged him with stones. Seshadri Swamigal often protected the young Swami, standing guard over him.

Ramana remained immersed in eternal bliss and paid no attention to his bodily needs. Deeply touched by his silent depths, his devotees lifted him from Patala Lingam and carried him to a nearby Subrahmanya shrine. His loving followers would tend to Sri Ramana’s physical needs, including forcefully putting food into his mouth and begging him to chew and swallow.

Sri Ramana would continue to move to various gardens, groves, shrines, and caves around Arunachala Hill. It was during this time, after years of no contact, that his mother Alagammal came to visit him. No matter the visitor, Ramana remained in silence.

“Our Own Self-Realization Is The Greatest Service We Can Render The World.”
— Sri Ramana Maharshi

When asked to at least write something to his crying Mother who sat at his feet, he wrote: “The Ordainer controls the fate of souls in accordance with their past deeds. Whatever is destined not to happen will not happen, try how hard you may. Whatever is destined to happen will happen, do what you may to stop it. This is certain. The best course, therefore, is to remain silent.”

Eventually, Sri Ramana moved into Virupaksha Cave, where he stayed for 17 years.

Among the growing number of followers, including other religious devotees, men, and women of all ages, children, and animals, his mother came to visit him a second time.

When she fell ill, Sri Ramana provided loving care and affection for his mother, sometimes holding her hand throughout the night to comfort her. To expedite her recovery and cure her disease, Ramana prayed to Arunachala Hill with a hymn he scribed in the early morning:

“Oh Medicine in the form of a Hill that arose to cure the disease of all the births that come in succession like waves! Oh, Lord! It is Thy duty to save my mother who regards Thy feet alone as her refuge, by curing her fever.”

Once healed, Alagammal became a disciple of Ramana’s, and he named her Niranjanananda Swami. She would cook for the disciples at their new location called “Skandasramam Cave,” a little higher up the hill. Within a short time, her youngest son, Ramana’s brother, Nagasundaram, also became a disciple. His new name was Chinnaswami (the younger Swami). Ramana was committed to giving both Niranjanananda Swami and Chinnaswami intense, personal instructions on self-realization.​

Upon the moment of her death in 1922, Niranjanananda Swami attained liberation and was buried on Arunachala Hill. The site of her resting place became Sri Ramana’s mother ashram, Sri Ramanasramam.

The Teachings Of Ramana Maharshi

Ramana taught his disciples to refrain from fixating on the changing aspects surrounding life, death, and daily circumstance. Ramana wanted every follower to focus solely on that which sees all these things, the source that is responsible for all of it. Although he approved a long list of paths and practices, Sri Ramana taught that Bhakti (devotion) and complete surrender to the Self, the unchanging reality underlying all that exists, will spring forth our liberation.

As the ashram grew around him, Bhagavan would give upadesa (spiritual instruction) where visitors sat at his feet and asked questions. Because of his answers and the resulting experiences of his followers, Ramana became known throughout the world as an enlightened being.​

Ramana would not confirm that he was a guru and he never stated that he had devotees. Considering God, Guru, and Self to be the manifestations of the same reality, and with a tendency toward Shaivism, Ramana remained focused on teaching self-inquiry toward the goal of liberation.

While Sri Ramana was dedicated to silence and teaching self-inquiry, he was also extremely active at the ashram, which included cooking, cleaning and stitching leaf plates which held the free meals for the ashram’s many visitors. The biography entitled “Self Realisation: The Life and Teachings of Ramana Maharshi, written by BV Narasimha was published in 1931.

Paul Brunton wrote “A Search in Secret India” in 1934, which noted the “sublimely all-embracing” awareness that he received while visiting Sri Ramanasramam, Sri Ramana’s ashram. Brunton paid Ramana a high compliment when he described Ramana as ”one of the last of India’s spiritual supermen.”

Brunton went on to describe Ramana in this way, “I like him greatly because he is so simple and modest, when an atmosphere of authentic greatness lies so palpably around him; because he makes no claims to occult powers and hierophantic knowledge to impress the mystery-loving nature of his countrymen; and because he is so totally without any traces of pretension that he strongly resists every effort to canonize him during his lifetime.”​

After these books brought Sri Ramana Maharshi’s life into public awareness, other periodicals, and books detailing the profound experiences surrounding this master followed.

​Those who wish to explore the teachings of Ramana Maharshi may attend a Satsang (spiritual group) to learn more. His website has a list of Satsangs worldwide. You may also visit the mother ashram in Tiruvannamalai to experience a transmission of Sri Ramana’s light and teachings.

The more popular he became and the more visitors that wandered through the ashram, Sri Ramana wondered how he might regain his original solitude and silence. With that in mind, he escaped the ashram three times, after which he would wander the nearby hills and caves in silence. Although he would always return, it was widely known that Sri Ramana Maharshi craved his spiritual roots.

Many of his devotees regarded Ramana as the avatar Skanda, a divine form of Shiva. He was also thought to be an incarnation of Jnana Sambandar, one of the sixty-three Nayanars that inspired Ramana in his youth.

At the age of 70, as cancer ravaged his body, Ramana’s devotees begged him to cure himself. He lovingly replied, “Why are you so attached to this body? Let it go,” he said. “Where can I go? I am here.”​

Upon his death on April 14, 1950, at 8:47 pm, several devotees caught a glimpse of a bright, shooting star above the ashram and noted its beautiful reflection of Ramana’s light.