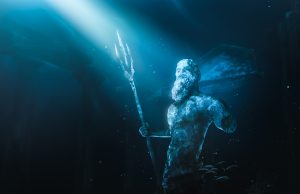 If you feel challenged by our relatively unconscious society, you may be one of the many dreamers who fantasizes about the lost city of Atlantis. Some believe the Eye of the Sahara in Mauritania holds the secrets we’ve long imagined to be true. Stretching 14.6 miles across, the Eye appears to be from another world. Considering Plato’s writings on the subject, it’s possible that this incredible structure is the final resting place of millions of Atlanteans.​

While Plato’s descriptions of Atlantis are epic and mind-blowing, many believe he barely scratched the surface. He described Atlantis as a massive formation of concentric circles, alternating between land and water, similar to how the Eye is seen today. He emphasized that Atlantis was a wealthy, utopian civilization that created the basis for the Athenian democratic model. Plato went on to describe the land as rich in gold, silver, copper, other precious metals, and gemstones.

According to Plato, the story of Atlantis, first told by the ancient Egyptians, has all the elements you’d expect from a culture that was not only ahead of its time, but also wildly arrogant. Atlantis was a leader in academia, architecture, agriculture, technology, diversity, and spiritual empowerment, their navy and military were unmatched, and the Atlantean kings ruled with extreme authority. It’s no surprise that Atlantis fell in ways similar to Rome, and potentially in a similar way to how the United States could fall.

“This power came forth out of the Atlantic Ocean … an island larger than Libya and Asia put together … Now in this island of Atlantis, there was a great and wonderful empire which had rule over the whole island and several others, and over parts of the continent.”
― Plato, Timaeus/Critias

Soon after waging an aggressive, unprovoked war on parts of Asia, the Atlanteans were defeated by the only army willing to defend the continent: the Athenians. Amidst the battles, the Gods thrust violent tsunamis, earthquakes, tornados, hurricanes, and floods upon the Empire of Atlantis. As if admitting its sins, Atlantis burst apart, dissolved into the ocean and desert, and was never seen again.

The Eye of the Sahara, also known as the “Richat Structure” and “Eye of Africa” is located in the Sahara’s Adrar Plateau in Mauritania, the Islamic Republic in Northwest Africa. This massive geologic, inverse dome contains rocks and sediment dating back to a time before life on Earth.​

Visible from space, the Eye of Sahara resembles a massive bullseye, which began to form when the supercontinent Pangaea broke apart. The igneous rocks embedded in the Eye include carbonates and black basalts akin to Hawaii’s Big Island.

The Richat Structure And Atlantis

Many believe Plato’s stories about Atlantis were parables and that he used Atlantis to set the stage for his ideology. Plato’s Atlantean narrative might be in the same vein as James Cameron’s Avatar, in which he warns us that corporate greed and racism can quickly pollute and potentially destroy our civilization.

King Atlas, aka King of Atlantis, and namer of the Atlantic Ocean is the same person as Atlas of Mauritania. Herodotus’s map from 450 BC places Atlantis in the same place as the Eye. The Egyptians, the first tellers of the Atlantis story, were colonized by Atlantis. It’s through their lineages that we came to learn about Atlantis and its precise location.

More Similarities Between Atlantis And The Eye Of The Sahara

“There were a great number of elephants in the island, and there was provision for animals of every kind, both for those who live in lakes and marshes and rivers, and also for those who live in the mountains and on the plains, and therefore for the animal which is the largest and most voracious of them.”
― Plato, Timaeus/Critias

Legend tells us that Atlantis was an empire made of ten kingdoms, with the island of Atlantis as the capital. The God Poseidon gave birth to five sets of twins, ten children in total, each one running one of the ten kingdoms. Having twins is a rare occurrence. It just so happens that the highest birth rate of twins on planet earth is found in Nigeria – very close to Mauritania.

Plato and Solon were known to have integrity and were therefore rarely challenged. Atlantis is the only story of Plato’s that was ever disputed.​

One of the strangest aspects of the history of Atlantis is that none of these theories are presented in Wikipedia, and every related page is locked. This includes pages about the Eye, King Atlas, and the God Poseidon. How is it that the universally accepted concept that Atlantis existed is left out of one of society’s most treasured resources?

If you’re still on the fence about the Eye of the Sahara being the location of the city of Atlantis, consider that the City of Troy was thought to be a myth for thousands of years, until it was found, exactly where Homer said it would be.