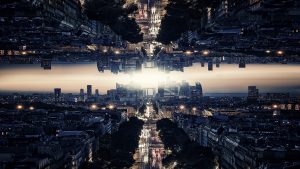 The concept of The Mandela Effect is simple. Over time, a few minor details surrounding significant events, and therefore our perception of these events, might somehow change and may continue to improve in the years ahead.​

In other words, the tried and true spacetime continuum that appears to be the backbone of our collective, three-dimensional, physical reality might have a ripple in it. It also may have produced a sister, parallel universe, which has birthed different scenarios, events, identities, constructs, and relationships.​

It might also be true that our tiny, insignificant brains are slowly evaporating and can no longer handle every detail that flashes across our eyes. As we forget events, out of fear, we attempt to reassemble them in our imperfect minds.​​

Given that we’re all probably of the same species, each of our brains might make mistakes that are akin to the next, especially when it comes to certain types of events and sets of details.

It’s important to consider that our brains are continually comparing, analyzing, and constructing ideas and memories to justify their notions of reality, often from poorly assembled concepts and thin air. Given that, it might be fair to say that all brains build memories and memory-bridges with similar strategies and outcomes.

All this to say that because of our shared DNA, our brains will construct similar data sets and similar conclusions.​

Maybe this is the question we’ve yet to ask: Have large groups of people moved backward or forwards in time, witnessed potential trajectories, returned to their primary spacetime paths, and then somehow integrated all collected information into new perspectives, refreshed with new sets of details?

“If (Quantum Theory) Is Correct, It Signifies The End Of Physics As A Science.”
— Albert Einstein

Whether you believe The Mandela Effect to be fact or fiction, the growing number of shared perspectives across a variety of ideas and events, and inclusive of a broad spectrum of socioeconomic backgrounds, is compelling.

Examples Of The Mandela Effect

There are growing numbers of experiences of The Mandela Effect, across a long list of categories.

Here are a few potentially shifted events that caught my eyes:

Many have also reported this same effect or dissonance in their personal lives, whereby a baby’s birthday or sets of event details slightly shifted over time.

Thousands of people throughout the world have reported these Mandela Effects. This is partly why scientists are considering the possibility that parallel universes do exist.

Scientists On The Mandela Effect

To consider some of the thoughts from the scientific community, one must first know the definition of spacetime. Spacetime consists of mathematical models that merge the three dimensions of space with the one dimension of time (which we have all come to agree-upon), resulting in a single four-dimensional continuum. In other words, given our agreements on how time moves and how we all move through three-dimensional space, we are all living within an agreed-upon four-dimensional reality.

Here are a few science-related notions that might have given birth to the existence or the milieu of ideas related to The Mandela Effect:

Time travel might provide us with the ability to experience a variety of our unique, potential, life trajectories. Here’s how that might work:

We’re already traveling through time, only forwards. This means that time-travel relative to other people also exists, which includes walking together.​

If the whole universe was spinning, which it’s not, time loops would emerge, which would give us the ability to choose from a variety of time loops to experience some of our other potential life trajectories.​

Since wormholes are bridges through spacetime, we could use them to travel into the past or the future. The challenge here is that we don’t know how to build wormholes. Further, we would need negative energies or exotic matter to do this, which we don’t fully understand and have not yet created.

This doesn’t mean that aliens and biengs from other dimensions are not already building wormholes which could be affecting our current perspective of reality and giving birth to additional spacetime loops and potentialities.

Quantum computers use tiny circuits, superposition, whereby multiple quantum states can be merged to produce a new outcome, and entanglement, which results in groups of particles that interrelate and cannot be described independently.

While this all sounds fascinating, quantum computing comes with challenges and potential nightmares. These fascinating machines do not always surpass every classical algorithm, and there is no known problem for which quantum computers outperform every traditional rival.​

The quantum theory related to The Mandela Effect goes something like this: As quantum computers interact with the various states of the atomic and subatomic particles within their spheres, they affect other particles within the realities of different dimensions. Some say this alone could change specific details surrounding specific events.

D-Wave is a category of quantum machine created by D-Wave Systems, Inc., in Canada. The company seeks to exploit the potential quantum effects inherent in their processing systems.

In the pursuit of this tech, scientific-minded Mandela Effect fans suggest that the intensity of the computational force from D-Wave computers could have a profound effect on particles, life, trajectories and events throughout the universe. In turn, D-Wave machines might easily create a Mandela Effect.

Some fervent, conspiracy theorists are so confident that Switzerland’s CERN organization is at the helm of universal particle manipulation, they’ve renamed The Mandela Effect, “The Cern Mandela Effect” and “The Cern Quantum Effect.”​

Established in 1954 and based in Switzerland, CERN is the European Organization for Nuclear Research. It has 22 member states/countries and has made hundreds of unique scientific discoveries, including the “God Particle,” otherwise known as Higgs Boson. CERN also invented the World Wide Web, not necessarily in partnership with Al Gore.

Because of the nature of CERN’s experiments, some believe spacetime is being unknowingly or knowingly manipulated, thereby producing Cern parallel universes.

While CERN scientists have good intentions, some say that CERN’s work is akin to GMO seed manipulation, in that it is taking risks with the foundational elements of our universe (atomic and subatomic particles) without fully understanding the potential risks.

Time will tell whether The Mandela Effect, CERN, D-Wave, and quantum computing will help us understand time-travel, particles, wormholes, changes in prior realities, and the creation of accessible time loops.
In the meantime, let’s stay in the present moment, meditate on our expansiveness, and do our best to love each other.