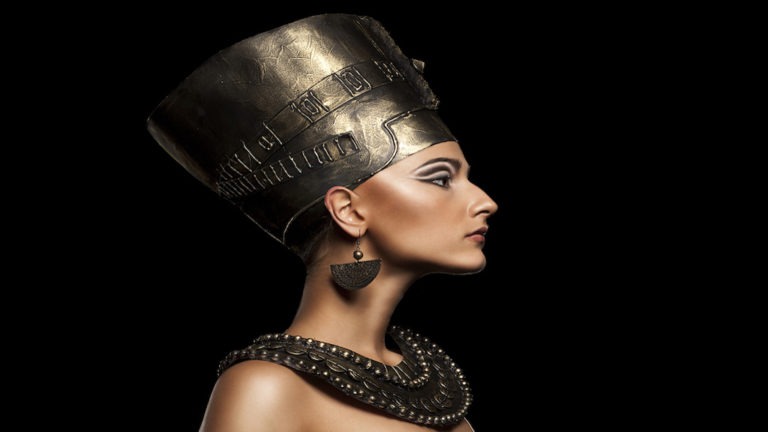 During 1353–1336 B.C., the Egyptian queen Neferneferuaten Nefertiti, and her husband, the “Alien Pharaoh,” a formidable warrior, led a religious revolution in Egypt. Was this major shift in ideology born from an intimate, personal evolution? Or were the King and Queen influenced by alien Beings who had been visiting the area for eons? And since there is no record of her parents’ place of origin, was Nefertiti from another world? The answers might lie in the hidden, burial chambers and secret altars of the powerful and mystical Queen Nefertiti, whom her husband saw as his equal.

Instead of paying homage to the over 2000 popular, Egyptian Gods, and honoring the stories handed down through the scribes of time, this courageous, royal couple opened their hearts to a single divine Being. In so doing, they introduced monotheism to the masses.

God’s name was Aten, also pronounced as Aten, Aton, and Itn, and he was embodied by the disc of the Sun, the mighty sphere that illuminates creation.

Was Aten An Alien?

It was said that Aten was the only God and one who could see into the hearts and minds of every worshiper. With his life-giving rays, Aten created the Nile for everyone’s sustenance and was the protector of creation.

In exchange for their loyalty to Aten, the devout people of Egypt would receive His blessings. Aten knew no bounds, and his instructions were seen as the only truth.

Was the Sun disc that the ancient Egyptians worshiped actually the Sun, or was the light-disc a piece of technology beyond their comprehension? How could the Sun share specific instructions? Were these ancient Egyptians interacting with a magnificent, verbal deity, or were they engaging with alien technology, misinterpreting their experiences as a spiritual phenomenon?

Was Nefertiti An Alien? Or Were Both King And Queen Hybrid Aliens?

The Egyptian hieroglyphs from that time illustrate Nefertiti and Akhenaten as having unique relationships with the Sun disc. According to a variety of these pyramid-sourced texts, the royal couple appears to have departed the Earth for periods of time.

There are similar texts showing their many returns to Earth. From this perspective, it appears that either Nefertiti, Akhenaten, or both of these influential people were extraterrestrials. The reason that the legends seem to favor Nefertiti as the alien is because no one has found any records that her parents ever existed.

What Were The Royal Couple’s Alien-Hybrid Characteristics?

The Queen and King had unique physical appearances when compared to the people of their time. Their specific features included more full hips, protruding bellies, thinner faces, and elongated facial features, plus the most remarkable aspect, elongated, cone-like skulls. These types of skulls had not appeared previous to their reign, nor since.

In the past decade, DNA samples were taken from several Egyptian pharaohs. Given the unusual prevalence of the CXPAC5 gene in Akhenaten’s mummy, there has been speculation that his genes may have been manipulated before his reign as Pharaoh.

Given that this gene is responsible for cortex growth, it would suggest that Akhenaten’s cranium housed a larger-than-normal cortex. When this idea is added to the questions surrounding the elongation of Nefertiti’s and Akhenaten’s skull, it provokes further curiosity.

All of this exploration points to one of the possible reasons why Nefertiti’s body has not yet been found: given her unusual physical makeup and DNA, she may have returned to her home planet shortly after her son, King Tut, passed away.

Throughout Egypt, Nefertiti was known by many names, including “Lady of Grace” and “Sweet of Love.” She was known to be a spiritual, sensual, and fiercely independent woman.

Rumor has it that Nefertiti was so beautiful and powerful, that her husband could not bear the comparison between he and his wife. It is said that Akhenaten disowned Nefertiti near the end of his reign, but allowed her to remain in a position of queenly power. He may have done so because he feared her wrath.

We know that Nefertiti was perceived as the King’s equal because of how she was artistically represented in the Tombs of the Nobles at Armana. Armana is the burial site of the most powerful leaders, courtiers, and persons of the city of Akhetaten. It’s clear that Nefertiti was an iconic force to be respected.

Given how her image was positioned on her husband’s sarcophagus, she came to be known as the embodiment of Isis, and all of her magical and sexual prowess. With this label came the belief that Nefertiti participated in the daily rebirth of the cosmos. There could be a no more dominant position in Egypt or on Earth.

In 2015, a deeper, high-resolution analysis of Tutankhamun’s tomb showed there are two unique door outlines within the tomb’s walls. These passages lead to adjacent, unexplored rooms. These two rooms may have been erected to add further secrecy and protection for Queen Nefertiti’s body.

Given that Tutankhamun died as a young boy might suggest that his subjects may have had to scurry to locate a proper burial chamber. Rather than keep his dead body in storage for several years, they may have swapped his body for Nefertiti’s, and placed her in a hidden side room.

Was This Nefertiti’s Altar?

In the Spring of 2001, I traveled through Egypt and was lucky to be invited into an ancient ceremony involving the God, Ra. It involved slicing our skin, merging our blood, and praising the eternal Sun of Light. I humbly declined and went back to a wild feast with my Bedouin friends, under the stars in the Cairo desert.

During this magical trip, I rode Arabian racehorses, listened to remarkable stories from John F. Kennedy’s 90 yr-old, now-blind, former, tour guide, and was invited into secret tombs that were closed to the public.

One of the tombs I visited had never been officially opened by either the government or local land authorities. It was a 2-hour horse-ride from the center of Cairo, far into the desert. When my guide brought us to a full stop, there was only sand in sight. As I meandered a bit, I noticed one of the mounds of sand had a structure beneath it.

My guide was negotiating with the gatekeeper, an angry man holding a machine gun. He waved at me to join them. When I greeted them, my guide told me to give the man $20 in exchange for the “experience of a lifetime.” What happened next blew my mind. I was shaking, but I could not have been more excited.

I was led to the structure under the sand mound, where there was a set of tall, wide, thick, wooden doors. I was told that I had 10 minutes to enter and enjoy what was behind them. My guide said to me,

“This is a secret place, known only to a handful of people. You are not welcome, but for these 10 minutes. This is Nefertiti’s private altar. You may sit near the altar, but do not touch it, as the Gods will know. You have 10 minutes.”

Behind the doors were 30 or 40 wide stairs. At the bottom was appeared to be a long table. I sat, not near the table, but atop of it, which is when I realized that this table was actually a beautiful, haunting and ornate altar.

A faint etching in the stone walls showed the light of Aten pouring onto the outreached arms of disciples. I knew I was in the right place, at the right time, and would never see anything like it again. Was this Nefertiti’s altar? Was I that lucky? I might never know the truth.