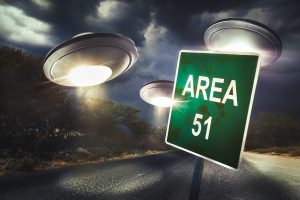 It’s bold and beautiful, surprising, and exciting. A playful geek named Matty Roberts created a parody Facebook event on a whim, leading millions of people to join him on a raid of Area 51.

Roberts facetiously envisioned a peaceful saunter onto forbidden land where the government allegedly stores extraterrestrials and exotic alien tech. While his original intention was satire, the FBI and military agencies responded to Matty with might:

“(Area 51) is an open training range for the US Air Force and we would discourage anyone from trying to come into the area where we train American armed forces. The US Air Force always stands ready to protect America and its assets,” Air Force spokeswoman Laura McAndrews stated in an interview.

So will the raid still happen?

Who works at Area 51? Lots of brilliant people with high-security clearances, many of whom likely have access to the most advanced weaponry the world has ever seen. If you run toward these folks, I doubt they’ll want to friend-you or cuddle. They’re trained to kill.

While the “Area 51 2 Million” appear serious, it would take advanced training and leadership to run a successful penetration operation. To enter and command a protected, in-land destination, a brilliant strategy would be required to disrupt and evade the existing defensive system.

I’m sure that Matty and his pals have the highest quality Comic Con costumes, but I doubt they could assemble an exceptional military team, master state-of-the-art weaponry, and commandeer their government’s property.

Area 51 is a highly classified US Air Force base located on a Nevada salt flat. Officially named Homey Airport (KXTA) or Groom Lake, it’s operations are reportedly all about military training. Everybody knows that the agendas at this massive underground laboratory include experimental aircraft and weaponry, and the exploration of alien visitors and their spacecraft.

The US military has never officially designated Area 51 a stealth laboratory for scientific experiments and alien tech. Regardless, there is ample evidence and hundreds of testimonies from high-ranking officials confirming such; none more notable than the highly-controversial nuclear physicist and alleged Area 51 former employee Bob Lazar.

Lazar recently found himself in renewed media spotlight after Jeremy Corbell’s documentary “Bob Lazar: Area 51 and Flying Saucers” was released on Netflix. Lazar claims to have worked at a branch of Area 51 known as S4 where he was privy to otherworldly, alien spacecraft. He says he even caught a glimpse of what he believes was the cadaver of an extraterrestrial.

Everything that occurs at Area 51 is considered a TS/SCI event. This stands for “Top Secret/Sensitive Compartmented Information.” For the first time in history, the CIA confirmed the existence of the base. The admission followed soon after The Freedom of Information Act on June 25, 2013.

The USAF purchased the site in 1955, located 83 miles from Las Vegas and home to the tiny town of Rachel, otherwise known as the center of the “Extraterrestrial Highway.” Every visitor to Rachel, NV hopes that the nearby Area 51 UFOs will flood the airspace above them.

Given that Rachel is home to only 98 residents and one business (The Little A’Le’Inn, a small bar/restaurant/motel), it’s impossible to find food, gas or lodging in the town. During large, potential influxes of visitors, the nearby Lincoln County Sheriff’s Department and KXTA’s military remain on high alert.

For those who might want to wander the area both intoxicated and on foot, the nearby government land has no fences. As you plan your storm-like sojourn, keep in mind that it’s around 11 hours-walk from Rachel, Nevada to Groom Lake.

Could this viral storm be a fake disclosure operation?

Over the past 50 years, we’ve come to learn that the government is a lot brighter and more strategic than we imagined. According to a long list of insiders, government agencies are a lot more manipulative and dangerous than previously understood. While reporting the news was formerly the simple vetting and sharing of information, it’s become a game of strategy, wit, and timing.

When the often late, quasi-, alien-related confirmations are disseminated to distract the American public from genuine alien disclosures, you know there’s a much bigger game afoot. There has always been a bigger game.

Is our daily news being seeded to prepare us for the eventual release of the truth? Is the reality of alien life on Earth far more outrageous than what is currently being reported in conspiracy news stories? It’s anyone’s guess.

It’s certainly possible that a story about storming Area 51 could be a well-timed misdirection.

What, are you nuts? It doesn’t matter if you’re riding a Segway, Honda Ruckus, if you’re behind the wheel of a 2017 Koenigsegg Agera RS, there’s no way anybody could survive zipping past brainwashed men who have guns. Especially at a hidden, advanced weaponry site.

Ahhh, but what if we all Naruto run at the base like Matty Roberts recommends in his event invite? Surely that would make us more aerodynamic and impervious to the guards’ barrage of bullets!

Naruto Uzamaki is an anime protégé who runs with back-stretched arms, which, according to nothing related to physics, gives him the ability to run 3000X faster than his usual 2.2 miles per hour… We can’t evade bullets by putting our hands behind our butts. While awesome, that would be silly.

When it comes down to it, the US has always defended its assets, especially land. I’m not sure on what grounds any U.S. citizen would stand-upon to justify haphazardly running around government land with the hopes of stumbling on aliens. Seriously, you would have to have recently come out of unsuccessful, inoperable brain surgery to justify this type of thinking. Thoughts and prayers for the afflicted!

Alien life as we know it

Since extraterrestrial life forms cannot be restricted to our 3-dimensional reality, we must consider that aliens exist in a variety of forms, and within a variety of realms. Also, each living Being has a unique electromagnetic frequency and therefore, can attune to unique sets of environments. It’s in this way that we must imagine alien life to exist in ways that are beyond our comfort and imagination.

From light rods to amorphic, living, breathing metals, the alien life that we’ve come to know as ugly green and gray men is likely far more diverse than has ever been reported.

Imagine the momentary appearance of a lizard-like creature on your ceiling to be a glitch in spacetime continuum technologies on other planets. This is what happened to me. What appeared to be a few minutes in Boston-time, could easily have been weeks to the life form that inhabited my bedroom that evening. I went along with it as if nothing was happening. He was cool about it, too.

Whatever alien beings we believe may exist, most likely constitute a tiny percentage of the types of alien lifeforms that are visiting the Earth today.

While we might be looking for outward signs of alien life and tech, these things may exist as sub-particles, able to expand or disappear upon the flip of a bit.

Alien life might also take the form of consciousness, whereby our thoughts are birthed or influenced from alien thought-tech, intended to limit or expand our minds. It’s also possible that aliens are already inserting their DNA into many of today’s living species, including you and me.

Let’s get real. Our entire planet was likely a biochemistry experiment created and operated by alien scientists from other worlds.

Unless you’ve been sleeping in a remote timeshare in Malaysia, without WiFi or telegraph, you probably have an inkling about how the government has been hiding tech and otherworldy creatures in the Nevada desert for nearly 70 years.

What’s inside Area 51? Probably the secrets being used to develop the next 100 years of U.S. military technology.

Often referred to as “Paradise Ranch” or “Dreamland,” the Groom Lake location is protected by over 25 square miles of restricted airspace and infused with a bundle of weapons. Safe to say, these highly trained assassins are probably not protecting a little factory that makes astronaut ice cream.

Add to that the fact that anything seeking entry into Area 51, from napkins to people, must be shuttled in by military-sanctioned vehicles.

I contend that there are very serious projects in development at Area 51. From their first resident who came from the 1947 Roswell crash to the most recent invitees, we can be certain that the cocktail parties at Area 51 have tapas that go far beyond Martinis and crispy, spinach puffs.

While some have said the site was used to fake the Moon landing, it’s more likely that Area 51 has been a boarding house for extraterrestrial Beings, and experiments involving their bodies, knowledge, and modes of transportation.

There are likely over 50 Alien species currently living on Earth, dispersed throughout secret networks of hidden locations, which include places from Area 51 to the Siberian tundra, and from China’s northernmost mountains to the underbelly of the South Pole.

What might happen when large groups of hippies storm sites owned and protected by the most advanced military in the history of the world?

My advice would be to stay home during storming events like these. If you truly want to explore alien life and consciousness, find a comfortable seat in your house. Sit quietly, close your eyes, and humbly request a high-level connection with the aliens that are probably already within your immediate space. Make friends.