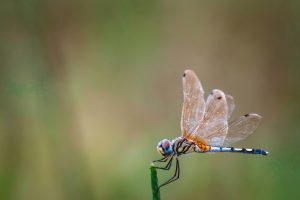 One might see dragonflies as insects of no substance, or little animals that are of little consequence to our lives here on Earth. We might even feel a hint of fear when seeing a dragonfly on a nearby tree.

With streaks of emerald greens, royal blues, and bright scarlets, sprinkled across multiple sets of wings and scales, Dragonflies have an other-worldly appearance. At rest, they are tall and erect, using two sets of hands as they build, connect, and tend to each other.

To the Native Americans, these beautiful creatures remind us that living in this world can cause us to attach to fantasies, illusions, and delusions. The Hopis believe that dragonflies have supernatural powers and a shamanistic presence. Because dragonflies are born in the water and ascend to the skies, Native elders see dragonflies as representatives of pure water, and liaisons to the Sky-Gods.

In some cultures, The Great Winged Friend might act as our divine-intercessor, guiding us in our pursuits of clarity, creativity, and blessings. By creating whirlwinds of thought and movement, the dragonfly can help us distract and fool our enemies.

As mystical coaches, the dragonfly encourages us to ground and manifest our dreams, as we seek validation for our natures in this complex three-dimensional reality. To some, these vibrant angels are embodiments of love, light, and joy.

“Dragonflies are reminders that we are light, and we can reflect light in powerful ways if we choose to do so.”― Robyn Nola

Throughout Ireland and Scotland, the dragonfly has often been associated with magic and fairies. In Scandinavian folklore, the Æsir cult glorified the dragonfly as the symbol of the love goddess, Freya.

In Japan and China, these powerful winged-Beings are known to be special, holy animals, with the potential to protect and heal those in need. They might be our spiritual judges, here to evaluate whether the souls around us are good or bad.

In some mythologies, dragonflies were the harbingers of magnificence, the gatekeepers who protect the doors that lead to the other realms. In all its legends, the dragonfly represents a doer, an abundance of spiritual energy, and one of the most expeditious travelers between dimensions.

When we think of dragonflies, the adjectives that emerge include agility, powerful, lucky, peaceful, graceful, light-filled, transformational, pure, wise, and enlightened. With these things in mind, the dragonfly could potentially inspire our spiritual advancement and liberation.

The Science of Dragonflies

Believe it or not, there is a Worldwide Dragonfly Association that promotes the research and conservation of all the species of the world’s dragonflies (Anisoptera) and damselflies (Zygoptera). Collectively known as the Odonata, they form a “clade” or “clatus” (latin), a group of living-Beings who have a common ancestor, and embody one branch on the eternal Tree of Life.

While their magnificence has few equals, dragonflies often take a majestic stance, with their mighty wings held outward from their sides. Damselflies are more slender, almost demure. In physical stances that appear to be protective, they raise their pinions over their bodies, whether they are threatened, at rest, or at play.

NASA has named its latest rover, “Dragonfly,” which is being considered for exploration on Saturn’s massive moon, Titan.

Dragonflies can travel at over 60 miles per hour and stop in the batting of an eyelash. They do the same things in reverse. They breed in wild fashion near streams and lakes and have been traversing planet Earth for over 300 million years. They’re zen warriors, and unless grabbed, cupped, and violently attacked, they will never seek human flesh for a casual bite.

Are Dragonflies Descendants of Aliens?

Many of our planet’s early prophets and seers were able to channel the truth about Earth’s humble beginnings. In deep trances, they saw the many varieties of alien lifeforms that visited, pollinated, and then inhabited our Earth.

According to these shamans, one of these living-Beings, who at that time was nearer to the size of a human being, was akin to today’s dragonfly. It might be that long ago; dragonflies governed several aspects of life here on Earth.

These shamans saw that the dragonfly-Beings came from a remote double-star known as Gamma Andromedae or Almach (also Almaak, Almak, and Alamak). Almach is the third brightest pinnacle of light in the constellation Andromeda, and 350 light-years from Earth.

When forming this planet and its many species, the original creators must have imagined the most coveted attributes to infuse into the creatures they were creating. Speed, power, flight, agility, magic, and grace would probably have been among them. By bringing the dragonfly and damselfly to Earth, the original creators blessed it.

These creatures were created with such magnificent artistry! It would be hard to deny that they weren’t meant to be at least companions for some of Earth’s original species and power-Beings.

The dragonfly and damselfly have been around for over 325 million years, in some form or another. While today’s dragonfly wingspan is often two to five inches, their ancient relatives had wings that spanned several feet.

There are over 5000 species of these lovely creatures, in 348 genera, with 11 families.

They’ll catch over 95% of the prey they pursue. Akin to humans, they can be are found anywhere from sea level up to around 12,000 feet. They live on every continent, except Antarctica.

The eyes of dragonflies are comprised of nearly 24,000 ommatidia. An ommatidium is a hexagon-shaped photoreceptor, surrounded by supportive and pigment cells.

When you examine the colors of today’s dragonflies, you will find that they are covered in thousands of colors, many of which have not been recorded by science. The dragonfly and damselfly are remarkable in every way.

Mating for dragonflies is a bit of “Tarzan meets Jane.” Flying in tandem, the male will hold the back of the female’s head while the female rolls her stomach under her body. This is how the female catches sperm from the male’s secondary genitalia at the front of his abdomen. Besides the male having two sex organs, a fascinating aspect here is that when the two bellies are united, they form a heart. If that isn’t magic, I don’t know what is!

From Nymphs to Dragonflies

Far from being your average insect, dragonflies are born in the water and live as nymphs or larvae for up to 5 years. At this stage of their lives, they have huge eyes, six legs, and a rounded, sectioned stomach. Akin to fish, they breathe through gills.

Once nymphs grow to adulthood, they crawl out of the water, shed their nymph skin, and rebirth as strong, young adults. It takes anywhere from a few hours to a few days for their four wings to emerge, dry and harden.

The time before their wings emerge is considered the “teneral” stage, which means “delicate and tender.” During this brief period, they are weak and cannot fly, which makes them especially vulnerable to predators.

Within a week of leaving the water, dragonfly nymphs complete their adult maturation and are ready to fly. When hiking near water, you might see a nymph’s hollow exoskeleton, which might be mistaken for a transparent, lifeless cricket.

From their first flight to their last, dragonflies are flexible aviators who can hover like helicopters, or fly up, down, and sideways. They can fly for several weeks at a time, and up to 100 miles a day.

These airborne hunters will die within a year of emergence from their shells, most of them expiring within a few months. Our powerful friends will rarely die from old age. Most will be hunted, caught and eaten by falcons, swifts, flycatchers, nighthawks, and other birds, along with lizards, frogs, fish, and wasps.

In folklore and life, dragonflies and snakes appear to have a secret alliance. There have been many reports showing these two creatures connecting, with the dragonfly resting atop the snake’s nose. According to legend and eyewitnesses, when snakes are in trouble, dragonflies will fly to their rescue.

Because of their “needles,” tools that can stitch wounds and heal the sick, they have been called “snake doctors” or “snake pilots.” American naturalist, John K. Strecker said, “Unless you cut off a snake’s head, a “snake doctor” can bring it back to life, even though its body may have been badly mutilated.”

Dragonflies embody a complex set of attributes. They represent the water and wind, the power of warriors, and the grace that be found through enlightenment. Because of their short lifespans, dragonflies are always living in the present moment. Having to endure multiple births in their lives, they teach us about the temporal natures of our physical realities, bodies, and self-identities.

Their transformations from nymph to teneral to dragonfly, are representative of our personal transformations. As they push from stage to stage, and from Earth to flight, these beautiful little Beings show us how grateful they are to be alive. In life, love, transitions, relationships, and more – BECOME THE DRAGONFLY!