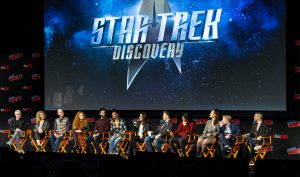 Are there hidden agendas behind all of the content we consume, including our favorite TV series and movies?

Are there secret teams of power-players manipulating our behavior through the dialogues between our favorite on-screen characters?

Was this predictive programming ingrained in Star Trek and its presentation of futuristic technology?​

Long before the 1960s, when the groundbreaking television series Star Trek was produced, the US government and a handful of US corporations were exploring how they might educate (“condition”) the American public into more peaceful compliance. They knew that as populations grew and as science advanced, a myriad of potential problems could develop. The world’s scientific community needed direction – and leadership. But how would they do it?

“High drama with emotion, plus crisis situations in movies, is a tremendous method of getting points across. It’s almost like coupling an idea with the drama and it’s downloaded like a virus into your subconscious. You’re being programmed and it’s called “predictive programming.”
— Alan Watts

What Is Predictive Programming?

A term most likely created by esoteric philosopher Alan Watts, “predictive programming” is an exaggerated form of subliminal messaging. It has long been thought to be the process that many governments and organizations use to influence the world so that it eventually favors its agendas.

The general concept is that when an organization wants to influence the public, they pay media companies to seed entertainment and news stories with specific concepts, years in advance so that one day the minds and behaviors of the public shift in favor of their predetermined agenda. By the time the conditioning plan is completed, society will have lost its impulse to resist or oppose the manipulated tides. The public might also be too numb to react to any preplanned, catastrophic events.

After Jack Kennedy won American hearts during his debate with Richard Nixon, the government and other stealth organizations knew their best outlet for influencing the public was television. They came to understand that to change human behavior, sell products, and set the stage for world and intergalactic governmental control; they needed to fully understand the potential of that little box in the living room.

Not all predictive programming theories are well-rounded. Like any conspiracy, there are those who cherry-pick examples and try to back-track into a problematic intention. The drawback here is that anybody with imagination can establish a narrative that ties two estranged ideas together. Think of the Reese’s Peanut Butter Cups commercial: “You got your peanut butter on my chocolate!” It doesn’t take a genius to connect the dots. But there are also plenty of compelling ones that may hold some validity.

Given all these examples, what might predictive programming conspiracists believe to be the next level of the game? Where might the programmers be trying to lead us? While many cases of predictive programming appear to be remarkable coincidences, there is no doubt that lobbyists with cash can influence just about anything in this world, including television and movie scripts.

Are Hollywood’s Elite The Culprits?

Even though Hollywood has long aligned with socialist and egalitarian principles, not all government-influenced storytellers have had noble intentions. During the 1960s, the groundwork for the deep state, in-country chemical warfare, black budgets and mass control of human populations began to take hold. By the time Nixon took office, the tides had turned, and the office of the President of the United States would never be the same. While not necessarily a puppet, the President does not have power over every area of our government.

If the predictive programming theory is applied to today’s biggest stories around wars, food, drugs, vaccines, massacres, and tragedies, then the media has been numbing our brains for years. With cancerous sodium lauryl sulfate in our soaps, dangerous fluoride in our water, and hazardous chemicals in our vaccines, it appears we’re eager to blindly accept almost anything as “okay,” even if it threatens our health and society.

Whether the theory is correct or not, the U.S. population is now far too comfortable and compliant to pursue a real-world revolution. If it wasn’t predictive programming in movies that prevented our revolution, eventual obsolescence might have previously been built into our DNA. That’s a story for another day.

Gene Roddenberry loved visiting the set of The Outer Limits, a groundbreaking, old-school, science-fiction television series produced in the early 1960s. Gene was friends with the show’s producer, Leslie Stevens Jr. Leslie’s father was a Vice Admiral in the Navy who was working with Rear Admiral Rico Botta, who happened to be on the ground floor of the new and secret space program.

From phasers and auto-sliding doors to video communication and computer sensors, there was a direct line of communication between the US Navy, the new space program and Hollywood. This became the education pipeline for the American public to learn about (and be prepped for) the future of tech.

While publicly Roddenberry was an atheist, the writing in Star Trek and Star Trek: The Next Generation included dialogue that introduced a slew of esoteric ideas, including ancient mythologies, DNA construction, Paganism, Gnosticism, the Singularity, The One vs. The Many, The Absolute, and the Eternal Consciousness. When writing and consulting for the series, Gene was either channeling information from the Gods, or government agencies encouraged him to introduce technological and spiritual concepts that could eventually enhance and protect humanity’s future.

Either way, Gene’s brilliance was the reason he was invited to speak at a variety of high-level institutions around the world, including NASA, the Smithsonian Institution, Library of Congress gatherings, and a long list of top universities. Mr. Roddenberry held three honorary doctorates: Doctor of Humane Letters from Emerson College (1977), Doctor of Literature from Union College in Los Angeles, and Doctor of Science from Clarkson College in Potsdam, New York (1981).

Star Trek And The RAND Corporation

When Star Trek was first produced, The RAND Corporation was under contract to the United States Air Force and other foreign organizations to research pro-social values and ways to make the world a better place.

In fact, by the time Star Trek’s first episode aired on Sept 8, 1966, RAND employees had already been involved with the show’s development for years. Without RAND, Star Trek might never have birthed such a long list of futuristic concepts.​

Going forward, every future Star Trek series and movie would benefit from the secret pipeline of ideas that continued to flow between NASA’s research scientists and the writers and producers of everything Trek.

RAND researcher Harvey Lynn worked tirelessly with series creator Gene Roddenberry to construct vital technological concepts and pro-humanity ideologies that not only became part of the fabric of Star Trek but also became the foundation for what might become known as “intergalactic socialism.”​

During the years leading up to its launch and within every script, Roddenberry was committed to humanism and authenticity, and Lynn provided all the fodder to make that possible. While RAND corporation may or may not have been directly involved, there is no doubt that Lynn was deeply infused in RAND’s research pursuits and had an indelible influence on the formation of Star Trek.​

In a series of letters between Lynn and Roddenberry, Gene once declared, “Any point you feel strongly about, please feel free to continue arguing.” This symbiotic relationship not only produced some of the best television in history, but it created a precedent for how research organizations and governments might influence the future of humanity through narrative.

RAND and Star Trek share a common belief: society should continuously seek to research and develop technologies that improve the human condition. If predictive programming in movies is a reality, let’s hope the “good guys” are winning. And by good guys, I mean women. Truly, that’s who will save the world.