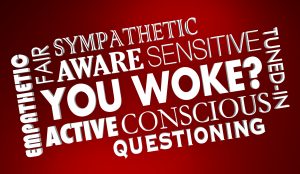 There’s a lot of crazy talk these days about being WOKE. Have no fear though. This is part of the “It’s Okay To Be A Narcissist” movement. This whole ARE YOU WOKE bullshit has become so cliché, every person with a bleeding heart or conspiracy theory is now calling themselves WOKE. This is a trend and it means nothing.

You have to ask yourself:

Here are a few conspiracy theories for you:

WOKERS don’t have library cards because they don’t like to read.

QANONers prefer their fantasy opinions, beliefs, and ideologies over thousands of collective years of training, education, and research because they’ve trained themselves to be overreactive, presumptuous, victim-minded, and fearful. This is an addiction. As you think, so you become.

All of these things are prominent in low IQ, low emotional intelligence (EQ), and non-empathic people.

Being WOKE is about responsibility, research, forgiveness, proactivity, and respecting people who are 100X more brilliant and better trained than you.

I never tell my mechanic, “Nah, I don’t think it’s that hose. I think my car blew up because of the Republicans.”

Being Woke is not about continuously reacting to your government and those who oppose your party of choice.

Being Woke is about being coherent enough to do research so you can defend your position using facts, rather than a contrived, manipulated, twisted ideology based on father-projection, charisma, fantasy, and fear.

Being truly AWAKE is not about falling off your bike then blaming 5G or Bill Gates.

Being Woke is about thinking clearly without influence from a religion or trending movement.

Being Woke is not about continuously complaining on social media platforms so you can self-validate your laziness and poorly researched addiction.

The idea here would be to:

Stop fear-mongering because that’s what small-minded people do when they’re unable to imagine better outcomes. The fear gives them the illusion of control. Using fear as a response to challenges is a self-limiting habit and low-level coping mechanism for people with low IQs and devolved emotional intelligence.

Improve and evolve your ideology until it evaporates. It’s worthless to you because it’s not based on the truth. It’s based on the family, religion, and society you were born into. It’s based on contrived and self-serving ideas passed down from generations of codependent relating.

Your ideology and belief system are mostly born from ego, media taglines, and fear.

The truth is far easier, simpler, and allowing.

Being Woke means that you’re seeking to understand that the Eternal Consciousness includes every aspect in all of creation, which means that it will need to work itself out, even if it’s bumpy and horrible at times.

How To Be Truly Woke

Just because it’s outside of you and uglier than you, doesn’t mean that it doesn’t deserve the space it needs to work itself out.

Unless darkness steps forward, it cannot achieve the light. So if something horrible is happening, accept it, just as you would something positive. It’s all the same. Even darkness has a womb filled with light. Being WOKE is about owning your position in life and working with reality to improve upon it, helping where and when you can.

Being WOKE is about peacefully protesting, not causing damage.

Being WOKE is loving every color and living Being in all of creation, and feeling their pain to the point of knowing it.

Being WOKE is not about guilting or shaming yourself and others, it’s about working to rid the world of these things.

Being truly awake is knowing that all of your anger is about you and your deficiencies. (Well, except when it comes to banks, insurance companies, and military spending. You can be fuck-all, crazy angry about all that!)

If you want to be awakened and truly WOKE: work on yourself, improve your attitude, become more loving, deepen your empathy for humankind and suffering, and realize that this reality is nothing but a tiny leaf twirling in the wind.

It’s here and then it’s gone. So are we.