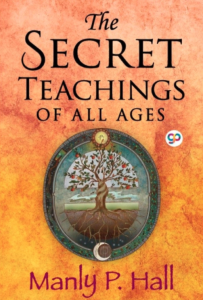 Manly P. Hall – his writings are remarkable and piercing!

Born in Peterborough, Canada to a Rosicrucian-Chiropractor Mom and a dentist Dad, Manly Palmer Hall moved to the United States at a young age. Armed with an obsession for mysticism, Manly became a prolific writer of esoteric books. After launching himself as an ordained minister of The Church of the People in Los Angeles, Manly P. Hall grew to become one of the century’s most active teachers of ancient philosophies and lost traditions.​

In 1928, Hall wrote, “The Secret Teachings of All Ages – An Encyclopedic Outline of Masonic, Hermetic, Qabbalistic and Rosicrucian Symbolic Philosophy.” Weighing over 15 pounds, the volume was often referred to as “The Great Book.” This work, which covers a variety of philosophical, theosophical, and mathematical topics, sold for over $70, which equates to $1043 in today’s money.

“To live in the world without becoming aware of the meaning of the world is like wandering about in a great library without touching the books.”
― Manly P. Hall, The Secret Teaching of All Ages

George Barron, curator of the De Young Museum at the time, said, “Into this volume has been compressed the quintessence of a colossal learning. It is a living human document, pulsating with the mental and spiritual vibrations of a profound thinker who takes knowledge for his province and reduces whole libraries to a single tome.”

Hall wrote his opus because he was dedicated to reporting on, “the proposition that, concealed within the emblematic figures, allegories and rituals of the ancients, is a secret doctrine concerning the inner mysteries of life, which doctrine has been preserved in toto among a small band of initiated minds.”

Who is Manly P. Hall? He’s most likely the reason that esoteric writings and teachings have exponentially grown in popularity over the past 20 years. Without his longstanding commitment to inviting these ancient teachings into public consciousness, we might have lost the most essential truths of the ages.​

With a career that spanned 70 years, Mr. Hall gave over eight thousand lectures, including two at Carnegie Hall in New York City. At Carnegie, Manly P. Hall’s lectures were titled “The Secret Destiny of America” (1942) and “Plato’s Prophecy of Worldwide Democracy” (1945).

Over time, Manly published over 150 esoteric books, essays, treatises, and pamphlets, which covered a wide berth of topics, including:

“Experiences are the chemicals of life with which the philosopher experiments”
— Manly P. Hall

In 1934, Manly P. Hall founded the nonprofit organization known as “The Philosophical Research Society” (PRS) in California. Still in existence, PRS is dedicated to the study of religion, mythology, metaphysics, and the occult. It houses over 50,000 volumes, including all of the books authored by Hall. In 1995, to keep their unprecedented library afloat, PRS sold their world-leading book collections on alchemy, esoterica, and hermetica to the Getty Research Institute.

Manly felt strongly about his organization, saying, “Education at any age is a lifelong dedication to the improvement of character, and the enlargement of understanding. There is no reason why PRS should not be remembered like Plato’s Academy, but if it is to continue, the society must make use of the most advanced technology available. I now envision a university of the mind, and think that through proper organization we can bring this message of enlightened living to a much greater audience throughout the world.”

The Philosophical Research Society has influenced many of today’s thinkers and teachers, including several U.S. Presidents and other world leaders.

Manly was prolific, not only in his lectures but also in the writing of books. As his publications became more popular, Manly was able to enroll key benefactors Carolyn Lloyd and her daughter Estelle, whose family controlled oil fields in California. Carolyn funded Hall’s travels so that he could acquire ancient literature from around the world and begin sharing it with his followers.

At the start of his writing journey, Manly published a handful of small pamphlets including, “The Breastplate of the High Priest” and “Wands and Serpents.”

Manly had few known teachers, although he loved reading the works of H. P. Blavatsky. Madame Helena Blavatsky’s work centered around theosophy, a mystical, philosophical system. With regard for Miss Blavatsky,

Manly once said, “The original work of H.P Blavatsky stands unique, even within the field of related literature; and as a result of the years, which have passed, since 1888, when the Volumes were first published, we are aware that her own peculiar and particular insight, still makes these works unique, remarkable and valuable.”

While Manly’s first marriage was with Fay B. deRavenne, who later committed suicide, his second wife, Marie Bauer Hall, was born in Germany and lived a full life from 1904-2005. At an early age, Marie joined the convent to learn how to be a teacher. At 18, she ventured to the United States and married George Bauer. After raising two children with George, in 1950, she married Manly P. Hall.

“It is for this reason that the candidate assumes the vows of celibacy, for the close connection existing in the advanced disciple between the brain and the reproductive system necessitates an absolute conservation of all life energies.”
— Manly P. Hall

Marie Bauer Hall’s life work, which she was known to defend, was loving and supporting Manly P. Hall, and excavating the grounds of the Bruton Church and the elusive Bruton Vault in Williamsburg, VA. She hoped to unearth the secrets of Shakespeare, Francis Bacon, the Illuminati, and The Seventh Seal.

In 1938, the Rockefeller Foundation funded her excavation to unearth the original foundation of the 1676 Bruton Church. Despite her team’s worthy attempt and others throughout her life, Marie never found her treasure.​

Manly P. Hall died in 1990 at the age of 89. He succumbed to the hands of his greedy, thieving assistant, Daniel Fritz. While the evil conman did not abscond with Manly’s vast riches and library, he also did not serve prison time. It was an unkind and unjust conclusion to one of the most generous teachers of our time.

Manly P. Hall’s work inspired millions of people to seek their inner truths and expand their understandings of the universe. His work continues to be a beacon of light for those who seek it. When Manly died, he was a 33° Mason, the highest honor bestowed by The Supreme Council of the Scottish Rite.