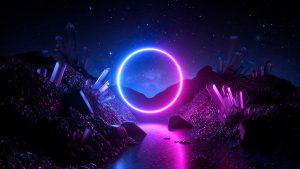 If ever you’ve looked up at the night sky and felt a connection with a bright planet or glowing cluster of stars, you might be feeling your soul’s connection to a past or future life. Given that you came from stardust and have been infused with divine light, you might feel this connection deeply in your bones. Is this an illusion? Or are you born from a distant star, a true descendant of a faraway light-body or planet, a Starseed?

When you piece that together in an equation, it looks something like:

That’s 1 billion-trillion stars in the observable Universe. While that number is massive, imagine the billions of realms and planets that are hidden from view. Imagine the distances we have yet to travel. Consider the possibility that time does not exist and that all matter changes or expands in each moment. Could it be that the number of stars, galaxies, planets, and realms is dynamic, and therefore, incalculable? This would make your birth on Earth either a planned event, a pre-birth choice, or happenstance.

When we wonder about our origins, we might consider that Earth is one of many experiments, during a time when collaborations of alien races seeded stars and planets to grow new worlds. When we die and then choose to reincarnate, it seems we have many options. As amorphous, traveling souls, we not only have this planet to consider, but many others throughout the billions of galaxies, realms, and universes, and within many continuums of spacetime. It’s in this way that our souls may have birthed a thousand times in a thousand different galaxies. We might also be living simultaneous, co-joined lives in a variety of places, and within several spacetime platforms.

Earth is an evolving, stable, three-dimensional planet, with an equal balance of physical and angelic experiences. Because of this, millions of Starseed may have chosen to live among us, hoping to serve or benefit from our style of vulnerability, Earth’s karmic cycles of rebirth, and our planet’s continual expansion.

How Did Humans Source Information On Starseeds?

The ideas and concepts around Starseeds come to us through channelers and seers who regularly connect with the Akashic records. These records comprise the energetic imprints of all intentions, thoughts, emotions, relationships, creations, and events, ever to have occurred, throughout every race, in all the realms, throughout all of spacetime. While much of this information is relatively easy to channel and comprehend, there are several perspectives on how Starseeds come to Earth and the many types of Starseeds.

What Is A Starseed?

According to the channelers, Starseeds are advanced spiritual beings, from other planets and realms, who possess spiritual and scientific knowledge that date back hundreds of thousands of years. It seems that while most Starseeds are benevolent beings who seek to help all living beings throughout all of the realms and universes, some Starseeds seek to control interplanetary resources for the benefit of their home planets.

Most agree that Starseeds are traveling souls from other planets who incarnated on Earth to inspire and heal human beings, and to participate in the planet’s evolution. It’s also possible that these Starseeds are physical descendants of aliens from other worlds, who traveled to Earth to be our planet’s lightworkers.

Starseeds might also have been birthed through inter-consciousness conception, virgin births, akin to the stories about Jesus. Another possibility is that any soul can become a Starseed when another Starseed infuses the soul with intentional light. This can occur when souls are in utero or at any other point in their lives.

Regardless, it seems that Starseeds do exist, in one form or another. We might never know which Starseed concepts are closest to the truth.

How Do You Know if You Are A Starseed?

You may have a quiet sense that you came from somewhere beyond this planet, and can imagine your physical appearance from prior lives, in other worlds. Maybe you fantasize about life in other galaxies with the hope of incarnating elsewhere in future births. You might also be wondering how you got here and if you’ll ever return. Even with these real feelings of alignment with other worlds, you might never know whether or not you are genuinely Starseed.

We all seek belonging, alignment, or kinship with a person, family, group, culture, or society. To fill our hearts and inspire us, we crave acceptance and connection. To help us identify where we might belong, we adorn ourselves with labels that make us feel special or unique. We might say, “I’m a seven on the Enneagram,” or “I’m a recovering Catholic,” or “I’m a conservative Democrat.” We might even say, “I am Starseed, Pleiadian, to be precise.”

Whether they’re based in truth or not, we love our temporary self-identities: the personality constructs with which we build our personas, relationships, and lives. When traditional titles and archetypes fail us, we hunt elsewhere, even into the stars.

This is not to say that your reality as a Starseed is incorrect. It’s to offer the idea that some, if not all, of our birth, imagined, and assumed identities could be illusions.

While most Starseeds appear to have come to Earth to teach and heal its citizens, not all Starseeds are intent on helping us evolve. Some of them have come to this planet for their benefit or to support a darker mission. Regardless of how exotic, not every soul has intentions based on light and love.

Here are some of the more popular and known types of Starseeds.

Physical Traits and Abilities
There is much chatter about the specific physical attributes of Starseeds. While some say that Starseeds are tall and thin, or have big eyes and broad foreheads, a soul seeking its expansion will not require one physical type over another. It would be fair to say that Starseeds come in all shapes and sizes. The soul inhabits a physical form because it is drawn into the bosom of a living being through resonance and alignment. Physical attributes are not consistent along these lines and have little meaning when it comes to our spiritual evolution and awakening.
The same can be said for the abilities of Starseeds. All living beings have a unique purpose, each of which gives birth to soul-specific skills and talents. Starseeds do not commandeer any category of industry, and not all of them have the same abilities, attributes, or talents. Starseeds can be machinists, teachers, dancers, artists, politicians, or frustrated stock analysts, as well as depressed, joyful, wild, contained, limited, or expansive, just like the rest of us.

Emotional And Social Awareness
When it comes to emotional intelligence and empathy, Starseeds may be more expanded in these categories. Given the vast arrays of ideologies and experiences they most likely have had, and having lived in a variety of worlds, it stands to reason that Starseeds could possess brighter hearts and the keenest intuition. That said, any soul can digress, and any digressed soul can expand, at any moment, and upon one congruent decision.

Intelligence And Consciousness
When Starseeds are part of spiritual lineages that seeks to help humanity, then they may have higher levels of intelligence and a more expanded collective consciousness. Some Starseed may have the sole purpose of assisting human beings as healers or spiritual masters. Others may have come to Earth to burn karma or heal themselves.

While it might seem novel or romantic to assume that all Starseeds are more evolved than human beings, it’s folly. Every soul, whether from this world or another, is fulfilling a purpose. Every soul is pursuing knowledge, experience, or expansion, on some level. Whether you are Starseed or from Jersey, your birthright is to invite intelligence, seek an expanded consciousness, and fully awaken at any moment.

Other Worldly Feelings
Anyone who has released their birth story, and the related accouterments, have initiated themselves into a more profound clarity. They have opened their hearts and minds, freeing them from the most base constraints. A Starseed may have a more expanded soul and, therefore, can appreciate and align with the nature of other worlds. If this is true for you, it’s quite a gift.

No matter where you’ve come from and no matter who you are, you can open yourself to the expanded collective consciousness that pervades all matter and non-matter. You are not limited by your label, race, or heritage. You are much more than you might realize.

If you seek the other worlds, call them to you. Satiate your passions and curiosities. In the end, though, the things you are calling might distract you from the expansion you seek.

While it might be interesting and exciting to imagine that Starseeds are more evolved than Earth’s human beings, the truth is that any of us can expand at any moment. A Starseed might have the ancestry that points to expansion, but they may or may not have the intention to pursue their highest self.

It’s easy to become distracted by the latest spiritual systems or the most charismatic spiritual media stars. It’s even easier to want to leave our lives and bodies so that we can transcend the Universe and become Everything.

To truly transcend, we don’t have to go anywhere. We can do it from our living rooms.

We’re built to enjoy our minds and all the fantasies they conjure. We are constructed in such ways that one thought can lead us into heaven, while another leads us into hell. When it comes right down to it, as a species, we’re not very stable.

Whether you’re Starseed, Muslim, Lutheran, Japanese, Iranian, brown, red, tall, fat, wonderful, itchy, angry, or hilarious, your current “you” is a temporary construct that you continually co-created with your pre-birth guides, and the parents and cultures you chose for this life. None of these things are concrete. [link text=”

They are temporary sets of constructs and conditions.

Your “you” is a layer atop a beautiful, powerful, vibrant soul, and you have unlimited potential in any direction. Your soul is not small letters; it’s an all-cap YOU, all the time. When we’re too distracted by our small yous, we can miss out on our fulfilling a purpose and embodying the Universe.

Always be careful with the labels you place on yourself. Every label is temporary, only partly true, and only at this moment. Each of these temporary self-identities has limitations and consequences. Try not to hold onto them so tightly.

We are in this life because we were called to this life. Live it as if you are here, in the now. Looking to the stars can be fun, but looking within is where you’ll find the gold. “Within” is your forever home.