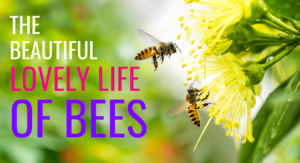 The Life Of Bees

I love bees. How about you? Most of them are so cute and remarkable diligent, it would be difficult not to love them.

Bees are the hardest workers on the planet. To eek out a teaspoon of honey, they kill themselves – literally.

Humans have been fascinated by the magic and movements of bees for centuries. These little insects have an incredibly complex social structure in which each individual has a job and works for the good of the whole. Imagine if humanity did this?

From making the delicious honey we so enjoy to caring for the young up-n-coming bees’ lives, these lovely creatures are busy from their first day of life until their last.

What does the life of bees look like on a day-to-day basis?

Read on to learn more about the life cycle of bees, as well as what each member of a colony spends their days doing throughout the year.

All Hail The Queen

The Queen Bee’s life is fairly straightforward – her job is to mate and lay all the eggs that will keep the hive growing and thriving. When she is a larva, she is fed royal jelly by her loyal buzzing servants, which transforms her into a Queen. She is not the only queen growing, however, and whichever Queen hatches first kills all the rest, which solidifies her position on the “Throne.”

Once the Queen is fully mature, she flies away from the hive to mate with drones from other colonies. After a few days of mating mid-air, she returns to her hive and begins laying eggs. She’ll lay as many as 2,000 eggs per day for the rest of her life, never leaving the hive again.

Drones are the only male bees in the colony, and their entire purpose in life is to mate. High-flying sex is the only thing on their minds. Drones are the male escorts of the bee world.

In most cases, drones do not mate with the Queen of their own hive. Instead, they fly up to an altitude of 200 or 300 feet, a mile or so away from the hive, and they mate with Queens from other colonies. This perform all of their sexy duties mid-air! The reason they do this is to maintain the diversity of the global genetic pools of bees.

Once drones have mated, they return to the hive to be fed by the worker bees. Kinda like gladiators when they return home from a day of battles at the local forum.

Drones do not do any work for the colony beyond mating. The lifespan of a drone bee tends to be somewhere around fifty-five days. As the weather gets colder, drone bees get pushed out of the colony and left to freeze, their life’s purpose accomplished.

Some bees in warmer climates will find ways to survive beyond their usual fifty-five days.

Worker bees have the most active lives of any in the hive. They perform all of the hive’s non-mating functions, including gathering food, caring for young, defending the hive, and building and repairing the nest. Worker bees’ daily activities vary as they continue through their month-long life cycle.

Worker bees tend to be the smallest of all the bees in the colony, coming in at just under half an inch in size. Drones are a little more than half an inch long, and Queen bees can be just under a full inch in length.

On her first day, a worker bee hatches from her cell, and begins to clean up everything around her. Unused pods need to be cleaned out in order to keep the hive healthy and in good order. She begins cleaning out her cell and then moves onto other cells that may have gathered dirt or other debris throughout the hive.

After that first day or two, a worker becomes a nurse bee, caring for all the developing eggs that the Queen has laid. She produces jelly and feeds the larvae as many as 1,300 meals each day.

As they develop, young worker bees feeds all of the growing eggs her bee bread, made from a mixture of pollen and nectar. On the fifth day of their development, she seals up their cells so they can finish their development.

After the first week of their lives, worker bees are already considered middle-aged, and they move into a new set of duties. During this next week or two, worker bees may take on a variety of roles within the hive. Oftentimes, they start out as processing workers, taking nectar from foragers and passing it to other worker bees who store it away to become honey.

Middle-aged bees also usually take on the role of hive architects, expanding the hive and repairing any cracks.

These tough old bee-folk make wax and build new cells for honey storage or for larvae to grow in.

These boomer bees may also create the bee bread that feeds young larvae.

Only when workers reach the end stage of their bee life cycle do they begin to leave the hive more regularly. As bees enter their third and fourth weeks of life, they become foragers, flying out from the hive to gather nectar and pollen. As foragers find good spots with plenty of pollen, they alert the other bees in their colony to this spot so they can focus their efforts there.

This is similar to New Yorkers who retire to Miami. Instead of gathering pollen, Florida retirees visit the area malls on little scooters and buy local newspapers and Entenmann’s crumb cake.

As they age, worker bees also help process nectar into honey. They run the warehouse and store the nectar, and they beat their wings to evaporate water from the developing honey. Some older worker bees also help to guard the hive and make sure no bees from other hives sneak in and steal their liquid goals.

The Life of Bees in Spring and Summer

Much like us, bees’ daily activities change with the weather and the turning of the seasons. Spring and summer are the bees’ busiest seasons. This is when they collect bundles of pollen and nectar from blooming flowers. The warmer months are also the safest to move around inside and outside the hive.

During the Spring and Summer, worker bees busily harvest pollen as much as twelve hours a day, as well as store nectar, make honey, repair the hive, and tend larvae. Drones fly out to mate with Queens from other hives, and the impregnated Queen of the hive spends all her time laying eggs.

The Life of Bees in Fall

Once the weather begins to cool down and the autumnal equinox comes around, bees prepare the hive for the long, harsh trek through the freezing months of Winter. Oftentimes, this means ejecting the drones from the hive and leaving them to die. The drones have performed their purpose by this time, and they’ll just consume hive resources during the leaner months, which would prevent the safety of the Queen.

As the weather cools off, the Queen’s egg-laying pace slows down a bit. The hive will need every bit of its honey to keep the current population of bees alive until the flowers bloom again. They don’t have resources to devote to caring for new bees, and moving around the hive can be dangerous in freezing weather.

The Life of Bees in Winter

Once Winter sets in, all the worker bees return to the hive and settle in to make it through the Winter months. They form one large huddle in the center of the hive, with the Queen in the middle of the huddle.

Bees take turns buzzing their wings to warm up the hive, their Queen, and the other worker bees around them.

Bees rely on their honey stores to make it through the lean Winter months. A hive that hasn’t stored enough honey (or that has had too much honey harvested from them) may starve to death during this time. For the most part, the bees do not leave the hive until the weather warms up and flowers bloom again.

Learn More About the Life of Bees

From the moment their lives begin, bees have a dedicated role within their hive. Queens and drones spend their lives focused on mating, but worker bees handle every other aspect of hive life. From cleaning out cells and caring for larvae to harvesting nectar and pollen and turning it into honey, their daily lives are dedicated to keeping their hive healthy and running smoothly.

There are many lessons to draw from the lovely, beautiful lives of Bees. They are naturally and deeply committed to each other and their roles in the functioning of their hives. They roll with the punches so they can fulfill their life missions – and they protect their leaders at all costs.

Most importantly, Bees feed the planet. They are the singular species that is always required for life on Earth. Without Bees, the world would eventually perish.

If you see a Bee, pray for her. Love him.

Don’t be afraid of them. While they might seek to protect their hives, if you keep a distance, they’ll have no reason to attack.

The Life Of Bees is a noble one. THANK YOU, BEES!

I am here to help you awaken and bravely create an inspired life. Make the world a lovelier place! Learn more about our services today and start changing your life in the most positive way.

You are a beautiful Living Being filled with light and love, born from stardust. You are unlimited potential in every direction. With a focus on discipline, virtue, and your own goodness, you can become as expanded and liberated as you desire.

Pray for others and the Universe prays for us.

LOTS OF BLESSINGS TO YOU!

There is no “Other.” There is only you experiencing yourself.